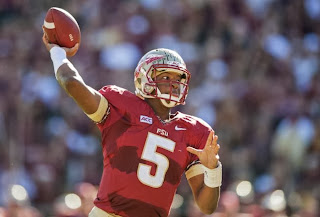 Terrelle Pryor's hot start fizzled and Matt McGloin has been playing instead, signalling that Pryor may not in fact be the long-term solution at quarterback.  If they team is unable to find stability at the position in 2014, the will need to find their franchise signal caller in the 2015 draft.

Redshirt sophomore quarterbacks never declare, but Jameis Winston could be an exception like Johnny Manziel and Brett Hundley.  Winston may have nothing to prove if he wins the Heisman Trophy and a National Championship and after being recently cleared of rape allegations, he may be looking to leave Florida State as soon as possible.  Winston could also rejuvenate fandom in Tampa Bay as a Florida product.

If Minnesota is holding the second overall pick, Leslie Frazier will likely lose his job.  Regardless, I doubt the new head coach will immediately give up on Boyd and the team will look elsewhere with their top pick.  Jared Allen is a free agent in 2014 so the team will need to find a new pass rusher. 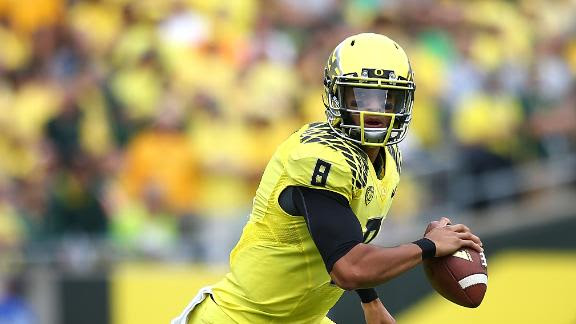 If the Jets are picking this high, Geno Smith is gone and Rex Ryan likely will be too.  Whoever is coaching the team in 2015 will look for his guy early in the draft.  Mariota could be taken in the top had in 2014 had he decided not to return to school.

Maurice Jones-Drew enters free agency in 2014 and will likely look to sign elsewhere.  In reality, this is a blessing in disguise for the Jaguars.  Jones-Drew turns 29 in the offseason, but he already has a lot of miles on him after rushing for nearly 8,000 career yards and he has a career low of 3.5 yards per carry this season.  Jacksonville will need to remodel their offense.  Quarterback was a start, but playmakers are still needed, especially if Justin Blackmon can not stay out of trouble.

Brian Orakpo enters free agency in 2014 and Ryan Kerrigan follows a year later.  Washington will need to rebuild their pass rush in the immediate future.  Fields has a monster freshman campaign before missing almost his entire sophomore season due to a foot injury.  If he shows that he is healthy in 2014 he should be a high pick. 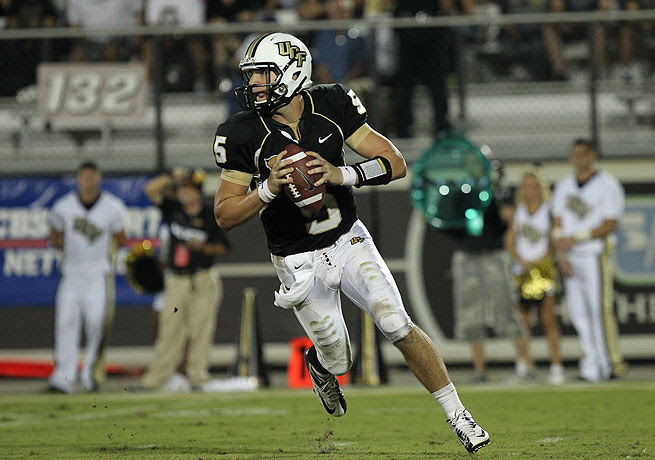 Arizona has been a quietly surprising team this season, but Carson Palmer is clearly past his prime.  The Cardinals have the ability to void Palmer's contract in 2015 and could do that or decide to retain him while they bring in a young replacement like Bortles for him.

The Bucs gave Mike Williams an extension during last offseason and they have Vincent Jackson, but Cooper is the top player available and would serve as an upgrade to Tampa Bay's passing offense.

San Diego has issues at receiver that need to be addressed.  Tight end Antonio Gates is old, while Eddie Royal and Vincent Brown enter free agency in 2015.  Regardless, an upgrade is needed even if those players are retained. 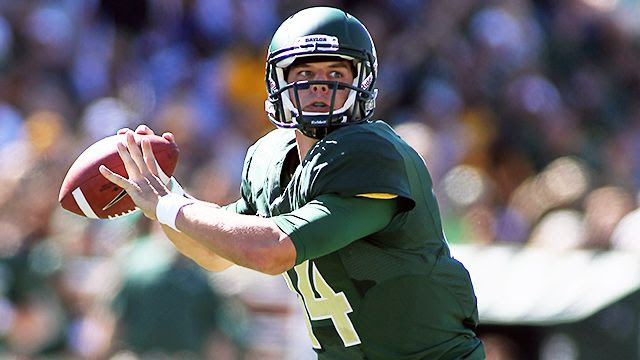 Jake Locker started the season looking like he finally turned the corner and was going to become the franchise quarterback the team envisioned him to be, then he got hurt again.  Locker is too much of an injury risk to keep at quarterback and if he can not play a full season in 2014, the Titans will likely move on from him.  Petty rounds out a stacked quarterback class in 2015.

Ike Taylor will be a 35-year-old free agent in 2015, so finding a new starting cornerback will be on the Steelers shopping list.  Darby is also a world-class sprinter.

There is still a chance that Amaro may declare this year, but if he returns to Lubbock, he should still be a top 15 selection in 2015.  Tight end is a big need in Buffalo, E.J. Manuel has no real safety valve. 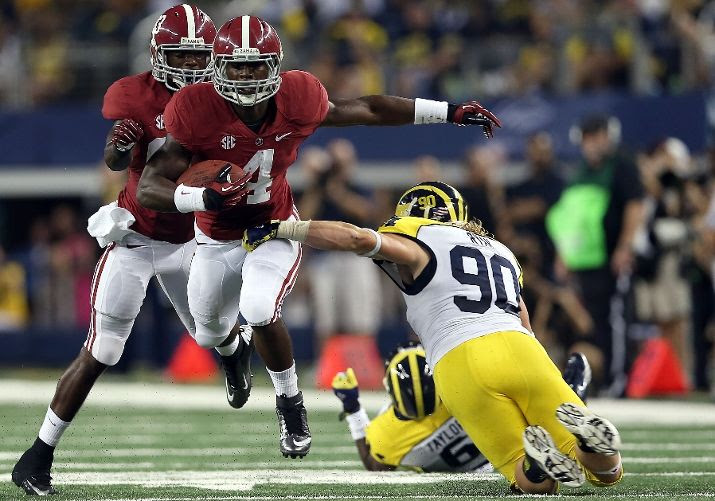 David Wilson has been injury prone and a disappointment in his brief tenure with the Giants.  New York, who has been forced into a running back by committee approach, may look to upgrade this unit in 2015. 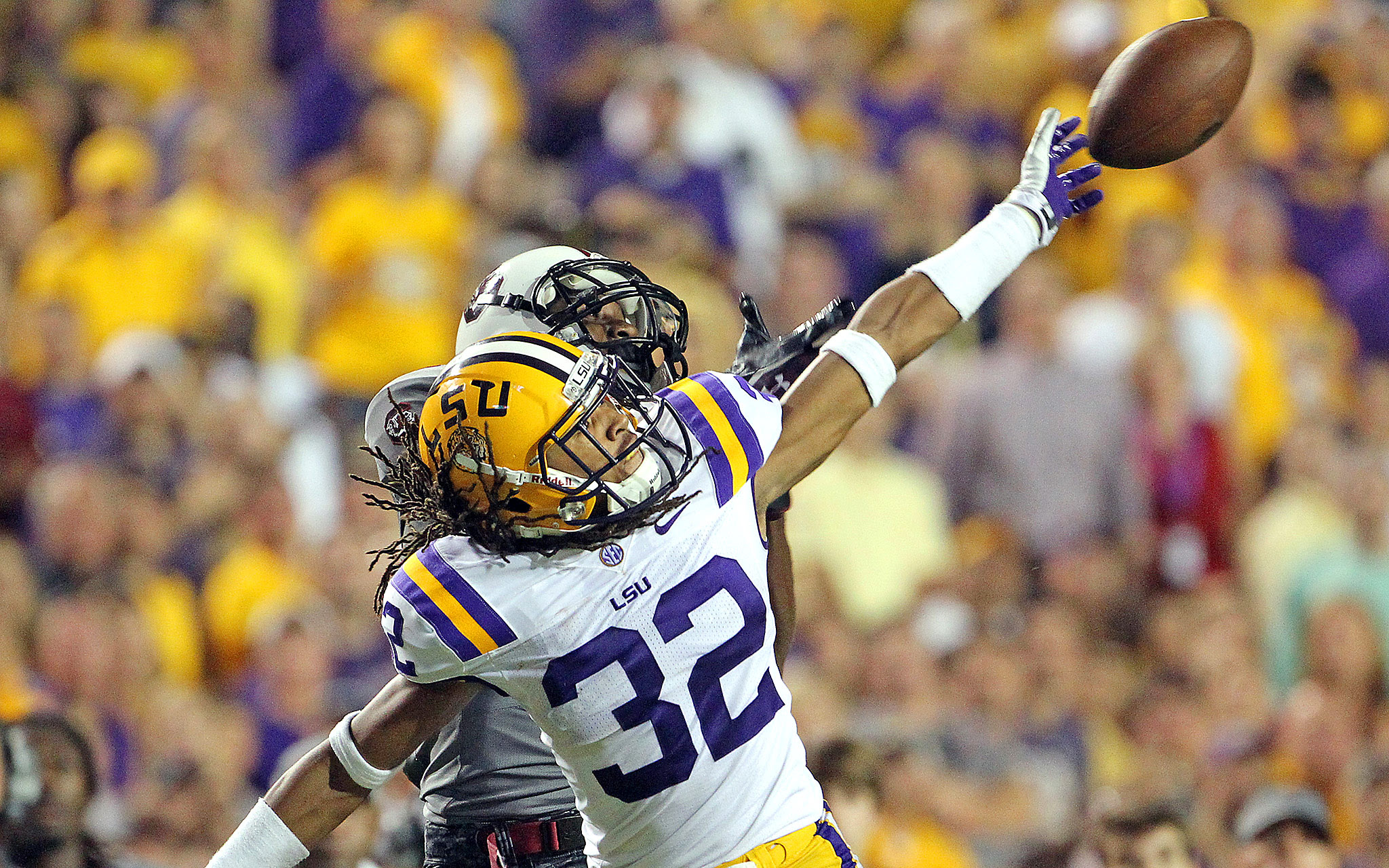 Cleveland has Joe Haden, but they can upgrade across from him.  Besides, in today's NFL, you can never have enough cornerbacks.

The Falcons gave Sam Baker an extension during the 2013 offseason, but he has been horrible since.  He is due for a massive raise in 2014 and if he underperforms again, the team may look to bring in some new blood for the blind side.

Chicago has both of their starting cornerbacks entering free agency in 2014.  If they are unable to retain them, the Bears will look to find a replacement.

The Rams added the short, speedy Tavon Austin last year, but Benjamin really could be the one to solidify the wide receiver options.  Benjamin is a 6'5" 240-pound matchup nightmare. 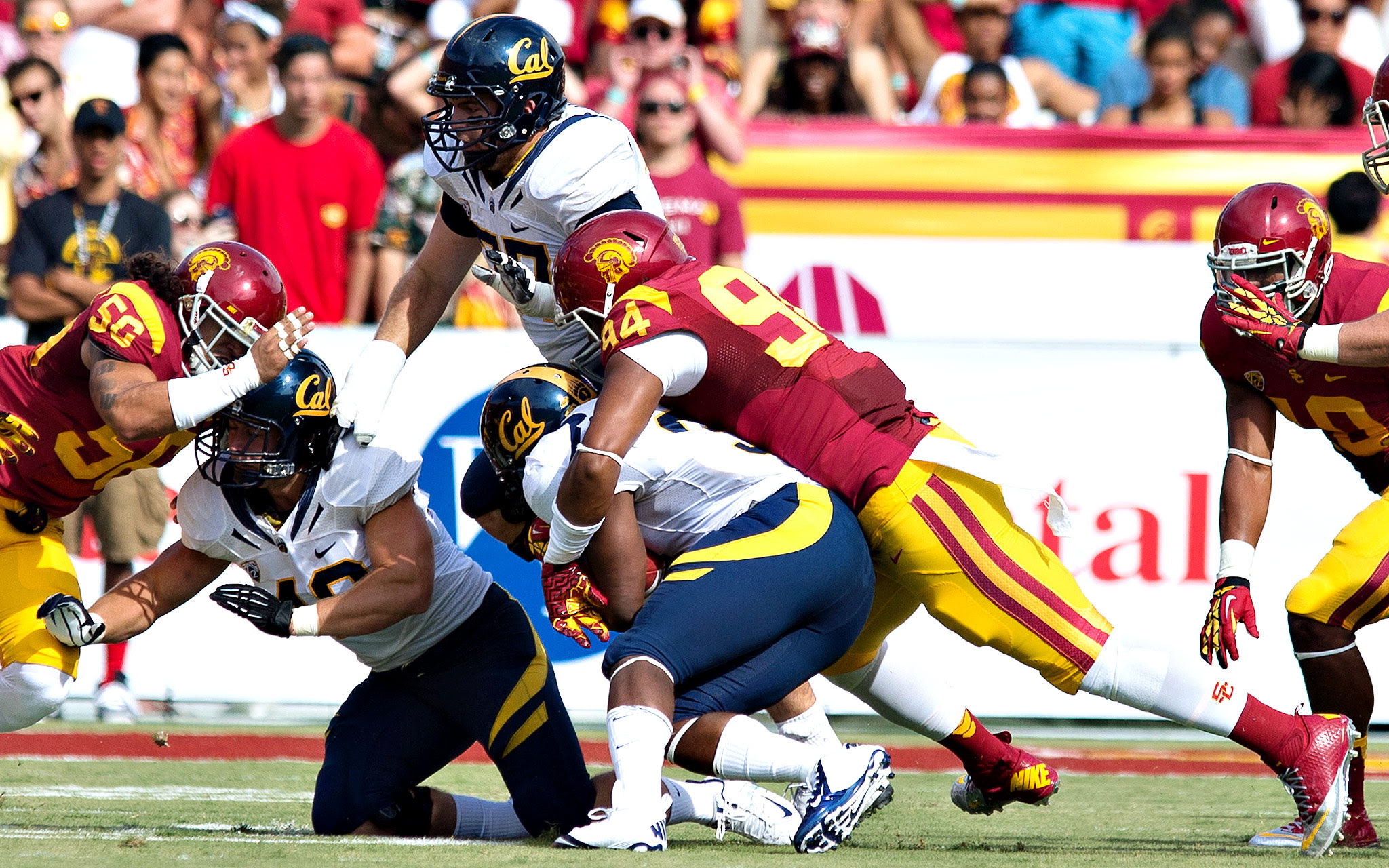 Houston has a penchant for taking the top player available and at his juncture it is Williams, who is in the running as the top defensive prospect of this draft.  Williams would join an already loaded pass rush. 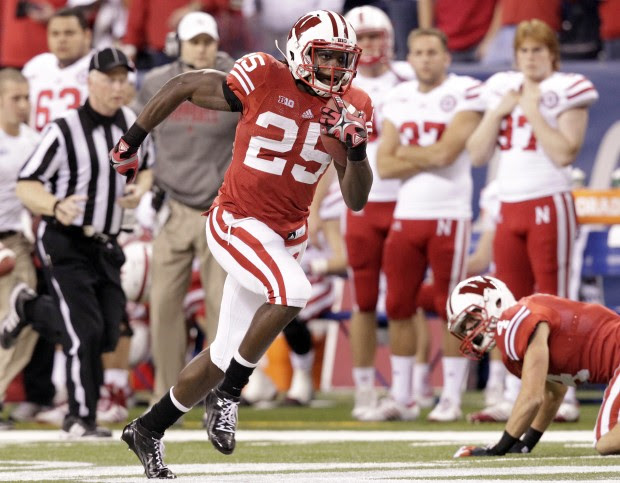 Mark Ingram, Pierre Thomas and Darren Sproles all have expiring contracts in 2015.  Quarterback Drew Brees will be 36 in 2015, so having a balanced offense will be necessary. 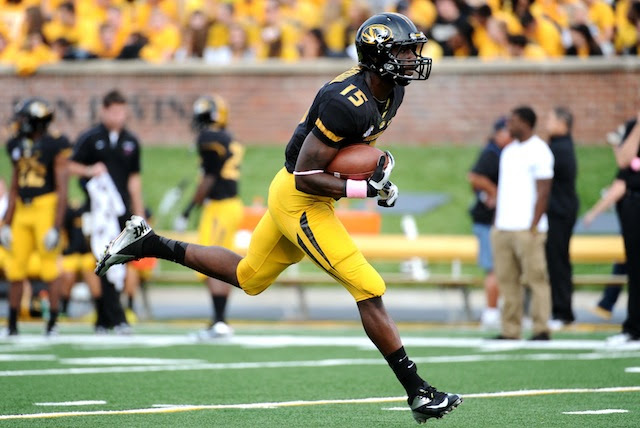 Dwayne Bowe is one of the most overrated receivers in the NFL and has become unable to beat man coverage since signing an extension.  The Chiefs need receivers who can stretch the field because their short passing game is not a long-term solution. With DeMarcus Ware entering the final year of his contract, the Cowboys may want to bring in a new player to take his place if they are unable to retain Ware.  Even if they do re-sign him, however, depth is needed at the position. 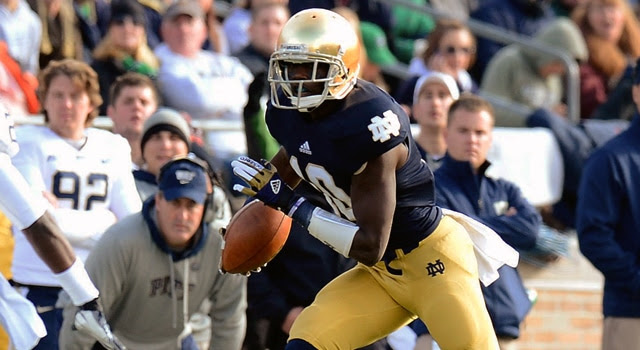 Currently, the only reliable receiver the Ravens have is Torrey Smith.  Baltimore needs to upgrade their group of receivers, otherwise opposing defenses will just continue to stack up the box against Ray Rice.

The safety position has been a massive liability for the Packers this season and something that must be corrected.  Green Bay is likely out of the Haha Clinton-Dix sweepstakes in 2014, but Harvey-Clemons should be available for them in 2015.

Lamar Miller has not made the most of his opportunity as the Dolphins feature back, amassing just 119 yards in a recent five game stretch.  If he continues to struggle, Miami will look into finding someone who can get the job done.

Rey Maualuga is a free agent in 2015 and the team may consider moving on from him then.  If they do not retain Maualuga, a replacement will be needed.

The top player available fits a big need for Detroit.  Dominic Raiola is a free agent in 2015 and at age 36, the team will likely look to inject some youth at center. 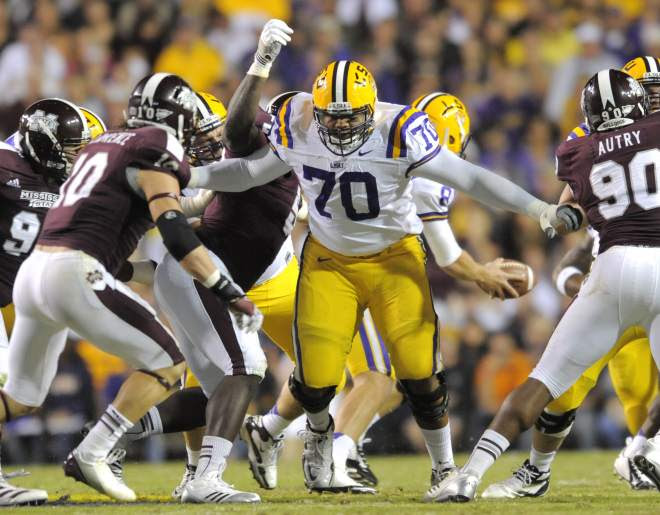 Nate Solder has solidified himself at the team's left tackle, but the right side is a bit of a mess.  If Collins somehow falls into the Patriots laps at this spot, this pick is a no-brainer.

Cary Williams has been a disappointment in Philadelphia and the only reliable cornerback on Philadelphia's roster is Brandon Boykin.  If secondary play doesn't improve in 2014, the team will seek an upgrade. The Broncos are going to need another edge rusher in 2015 to play across from Von Miller.  Shaun Phillips will be a 34-year-old free agent in 2015.

Carolina's pass rush has been exposed when Charles Johnson is neutralized or out of action.  The Panthers will need to find a way to provide consistent pressure on the quarterback.

Seattle has a strong defense, but the interior pass rush could be improved. Uko has a great motor and shreds blockers well from the inside.

Robert Mathis has played well in his first season without Dwight Freeney, but he is no spring chicken and will be 34 and in the final year of his contract in 2015.  Adding a pass rush would be a big upgrade to the Colts defense.
Posted by Justin at 7:37 AM

If you want to share your opinion with me and my mock draft, contact me at jtworsley@gmail.com

Other Mocks to Check Out

DC Pro Sports Report - NHL Mock To add your name to this list, e-mail me: jtworsley@gmail.com